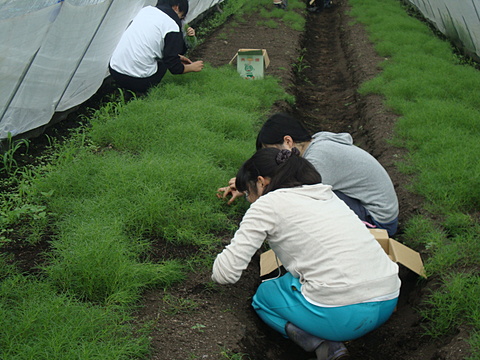 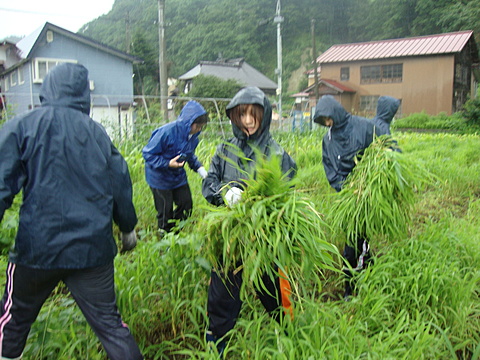 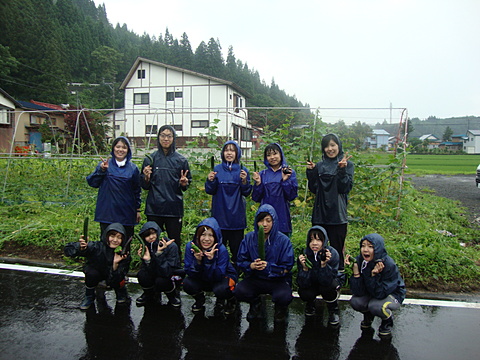 Yamadai FW which I carried out this time on Sunday on Saturday, July 27, 28th introduces the state of the second activity of "summer vegetables structure and regional cuisine & making soba experience"

The sky was bad, and it occasionally sprinkled from morning on Saturday on 27th, but was able to carry all out the activity that I finished it at gentle rain degree and planned because an everyday act of my ... unpleasant student was good

The activity performed training, the okahijikino harvest of seeding, pumpkins of a making soba experience, the side

As for the training of the pumpkin, bows lengthened too much and were hard to attach the distinction of a pro-vine and the branch vine, and there was the student who cut a pro-vine by mistake, but was able to work early than there was the power of a student of the department of agriculture and thought

I harvested what okahijikiha, Tanaka brought up in a house

It was worry, but, concerning the work in the house, that it was not hot was heat that some rain had fallen and did not bother you

In addition, Tanaka boiled nookahijikio just after a crop after the work and brought it

Attach wasabi soy sauce, and ate, but "tsuaki, tsuaki" peculiar to okahijiki and the texture that did are interesting; was delicious, and students were pleased at all, too

I worked on the making of regional cuisine using vegetables and the weeding of the field in a brown alga, summer for pumpkin ten days when I harvested it on the day before on Sunday on 28th

I chopped eggplant and cucumber, myoganadoo, and "it was one of Yamagata", and it was oil, and a pumpkin and the paprika did bare deep frying and made with okahijikihakarashi, jagaimotosasagino miso soup with the making of regional cuisine

As for the weeding from the afternoon, rain weeded the ko tteitatameokahijikino house

Because rain stopped halfway, weeded the outside, but is a sudden heavy rain; suspension ...
As I had the word to "be able to get wet as I came to FW with much effort" from a student when worried about what I should do, I wore a parka and reopened it

As the parka was thin, naturally the student had got wet, but was able to have the words that I was glad of which "it was good because it was rarely possible for the weeding on the rainy day"

Unfortunately rain had been outstanding, but was able to carry out all the activities that I planned this time

When an everyday act of my ... students is good grace, I want to appreciate this

In this, FW becomes the end in the first half year in Tsunogawa

The next time is ... in fun in the interesting experiences including the matagi experience being varied as for the making of Imoni, and the state of the activity introducing with blog again in late FW, latter period from October

Edible wild plant dishes and the U.S. making of (the second) 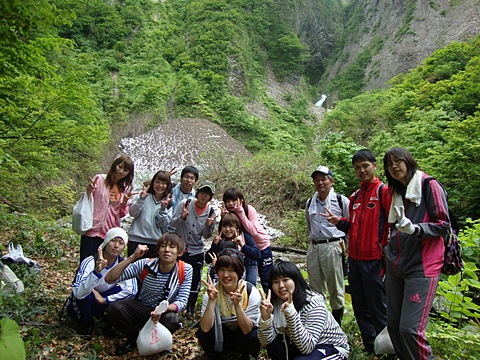 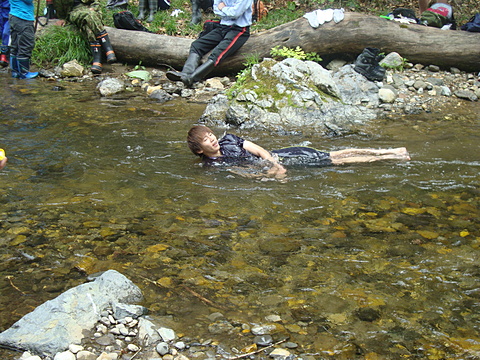 FW does the second activity report of "edible wild plant dishes and the U.S. making of" this time in earlier period of Yamagata University

When it was not growth, a practiced person, the grass was not identified as rice

The students jostle by a hand with the mud, and lose the balance, and fall down from buttocks; and ...
When work is over; whole body muddiness (laugh) ※It is regretted that there is not a photograph; ...

In addition, it was instruction after I learned the basics to an expert on ... day without knowing

myself who performed the making of Sasamaki, the winding string

It was told without being wrong or it was uneasy, but I let you do it, but I caught an art immediately and mastered the winding string whether it was a Yamadai student

It was waterfall hiking of kiyome on the second day, but the course that I carried out in an average year could not contain a car under the influence of snow and became the enforcement in the other course

... which I carry it out in a course to arrive at when I walk for approximately 30 minutes in an average year, but is the hiking in the this time one-way course to take 2 hours

I employ omoi breath and ... even youth

In addition, it was hiking while I received the explanation of the flower or the explanation after the old dorter from the local guide by way of a break on the way and studied of the hiking

And 2 spends time (while I almost die ...), and it is come to a waterfall of objective kiyome

Besides, as for two, ... case is furui metemashita immediately

By the way, FW suffers from "edible wild plant dishes and the making of rice" the end in the first half year at this time

Thank you, 12 students who participated this time

In addition, please come to Tsunogawa to play if there is an opportunity 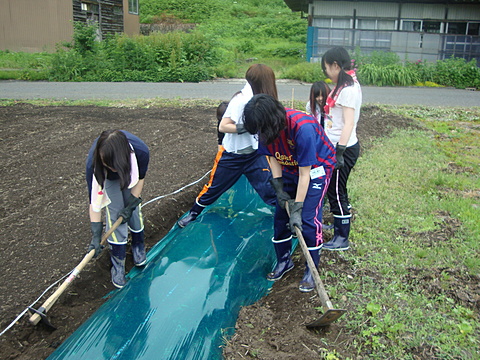 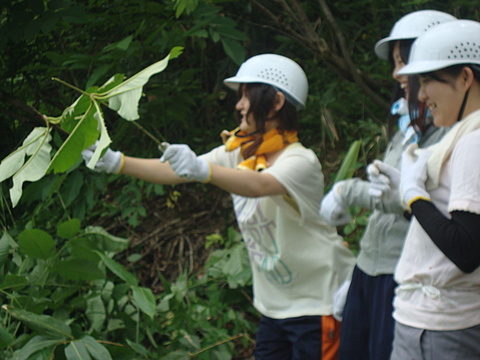 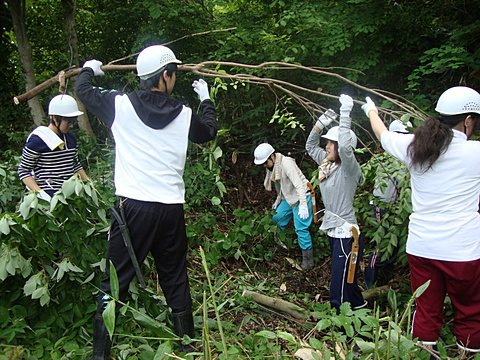 By the way, have considerably had free day from a last blog update day, but ...
I want to introduce an activity of the Yamadai FW (summer vegetables - abbreviation ...) this time

The enforcement day was the day when the forecast of the heavy rain just appeared on Sunday on Saturday, June 15, 16th

shika ... doing it, and the everyday act of students being good or ...
Or I do not know whether my everyday act is good (laugh)

I made an arch of cucumber & sasagino i with the dry field farming business and planted vegetables to the furrow in multi-okakete, "a cucumber, sasagi, eggplant, tomato, a green pepper, the Western, corn, green soybeans" and eight kinds of summer

The students "love me, corn. I worked hard at an activity while being tomato ... that I ate, and looking forward to the gain of the nado next time

I use the plot of the flat root district and plant the cherry tree to celebrate some kind of memory (including the memory that visited Tsunogawa, marriage memory, the memory that is a graduate, the entrance to school memory), and a cherry tree memorial tree plan (provisionally) is the plan that it is said to make the ground of the memory

Gather up the tree which an instructor cut in Chan so mainly in one place; worked, but in the tree such as "lacquer" when touched it, there was the tree of the dangerous system, and worked while warning enough you

In addition, I worked while product ttarinado enjoyed the classic "windmill using the leaf of ho" during a break

After the work, "this leaf remains it" Mrs. Tanaka ※I made the thing which I wrapped the rice which I covered with soybean flour in with a leaf of ho and took a break in the shade together

On the next time, it is a tropical day on Sunday for Saturday, July 27, 28 days

When seem to be too hot, having a swim in a river bidemosaseyokana ... 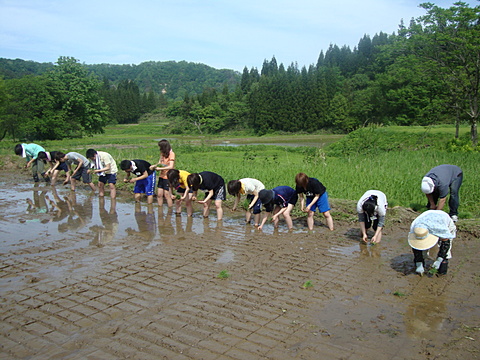 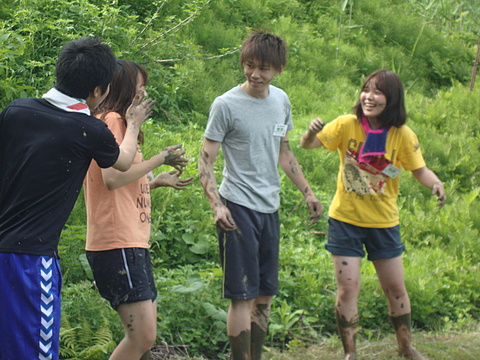 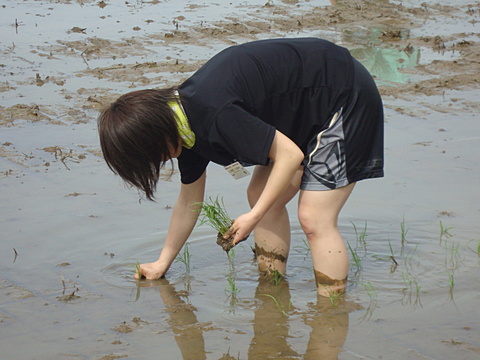 All of Country experience private supplementary school tsunokawano villages in HP that you are watching, hello ...

It is line now in an activity report about FW (edible wild plant dishes and the U.S. making of) which I carried out this time on Sunday on Saturday, June 1, 2nd in the first half of Yamagata University

11 of 12 people became barefoot and, in the rice-transplanting experience, planted rice

Even if it was a lot when it was an average year, there was overall half and was a cousin, but the student who participated this time was different in enthusiasm

Above all, it is speed of the rice-transplanting of Niida (girl) from Fukushima to remain in the impression

As "I planted sumako" as a help of the house since it was small and was doing (I plant the hand toward the edge where a machine does not enter), I handled it at speed approximately the double of other students

(cf. photograph)
On the second day, rope onautokorokara had you challenge it with straw to a

student made with straw sandals

Without my making straw sandals together, and having wanted to put the state of the activity in the photograph, but the straw which prepared being never enough; ... I am straw da chioshiteimashita with a fellow much more in the morning

Although there was a hand first when I came, students got an art immediately and completed one straw straw sandal in half day

... that it is regretted very much that there is not a completion photograph

The student who participated this time visits Tsunogawa on Sunday on Saturday, June 29, 30th on the next time

The contents of the experience become the waterfall hiking of weeding, kiyome of the rice field 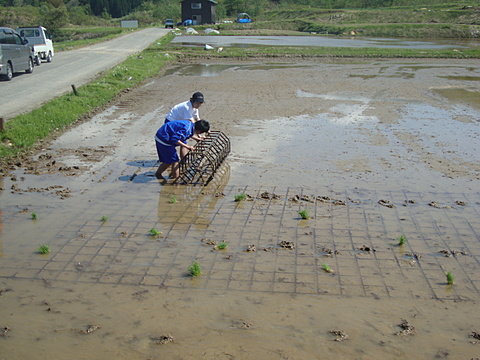 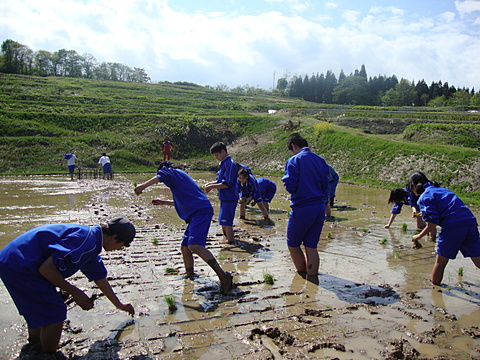 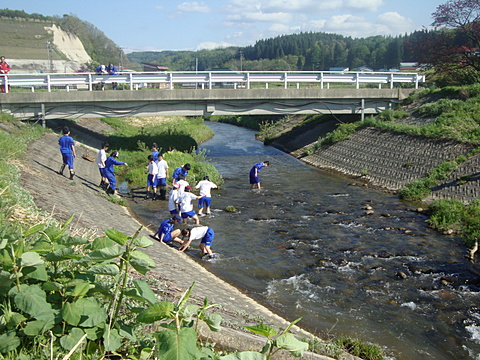 hello ... in HP that you are watching

I want to introduce the state of the farm village experience activity of "Tagajo City second junior high school" that visited Tsunogawa this time on Friday on 24th on Thursday, May 23

"The Tagajo City second junior high school state" was that this was the first time that I visited Tsunogawa, but was to check Tsunogawa since the days of a first grader, and to be perfect, and to have done prior learning

I rode with an emergency vehicle of teachers, and I went around the activity place, too and came on seeing the state of the activity of students

The group which worked on rice-transplanting washed the dirty boots, clothes in a river

Catching a cold kunayo which I was in high spirits, and the student who became dripping wet from head to foot broke

there were several students who remembered, "I would call me with a bear" who intended to be ridiculous in the case of a prior briefing session, and said and called out to "bear hello" "bear good-bye ..."

Though it was a joke, to really call it

Finally, Mr. Awano who started a car as the emergency vehicle and a patrol vehicle, thank you

In addition, it is sorry to have let the way

without the way advance

It would be very helpful

A student of "the Tagajo City second junior high school", teachers, it is person in charge of the trip to Japan again
I appreciate your using tsunokawano village

In addition, please use our group if there is an opportunity