The day when such an Indian summer is calm

As far as our homepage begins to change in earnest from this January and it is by little, but is glad that readers increase. There is the access from Taiwan yesterday, too and does not sleep in what time of surprised chestnut chestnut kurikkuri

← times
Even but who

saw it trying it hard, please introduce this homepage to a friend by all means from now on still more as a reader is a desired place

"Present suruze - wa - hhahhahha in that good old in old days to the introducer" and ← that the captain says it after all you whom do not sleep
By the way, it becomes the new system from April, and the Country experience private supplementary school tsunokawano village works on a feeling newly, too

As an opinion and the request of the experient push on to take it in, and to be able to make a better activity; thank you for your cooperation

There is nobody ← "all of the fan, noodles

I closed a curtain with the prosperity!

2012-03-26
It was performed yesterday in Tozawa-mura farm village environment improvement center on Sunday, March 25
"The fourth lesson ground performance"
This closed a curtain in the large prosperity

There are many people who are familiar with traditional arts of Japan, and a song and dancing, a sum drum exist in the village tsunokawano village of the entertainment, and an independence performance that they entertainment group puts power together and performs is lesson ground performance.
It was called off under the influence of an earthquake disaster, but was able to hold it safely again this year last year.
Mayor Tozawa rushed and had greetings only after making the fourth in an opening ceremony.
The performance began with one of Kadokawa Elementary School and a diligent drum and was dancing, hula, the various contents including the folk song.
It was at the good opportunity when the traditional fire of the village of the entertainment including people who caused a new motivation on seeing the program of people who stood on the stage for the first time this time and other groups continued burning more

The photograph wants to improve later 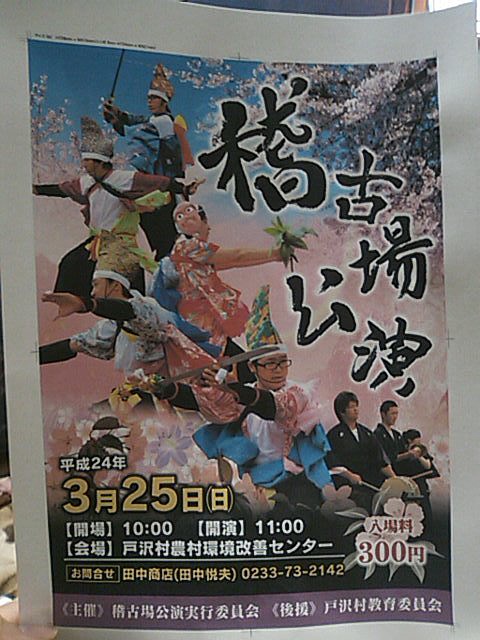 The entertainment groups which usually make tsunokawano village lesson ground gather and send the result of the everyday lesson to all of you.
Besides, a song by the Tsunogawa entertainment society of the foundation 33rd year and dancing, a harmony among primary schoolchild, junior high student drum, there is the stage of Fra by the hula circle this year from the Furukuchi district, too

As there is the branch of takoyaki and the pork miso soup, go to visit it by all means; give

2012-03-21
In March, it was the end, and, on the middle day, the heat cold was over on the equinoctial week with anything, too, but snow is ... here and there
It is more and is snowstorm kiwatarutsunokawano village for a slanting rain

Although a day shines, and, in I Web charge S, a heart lets jump "already in spring

" when become warm; ...
It feels tired with the snowstorm of the slanting rain really if I notice

By the way, I had only another ten days left this year.
There were a lot of wonderful encounter and experiences this year at the village of the river of having

Thank you very much, everybody who came to the tsunokawano village to play

As for everybody who supported soshitetsunokawano village, thank you very much

Web charge S could make a long-cherished homepage thanks to the support of many people, too and was really good

When konomossarino snow disappears, and spring comes, rice-transplanting and the kind makidetsunokawano village liven up again 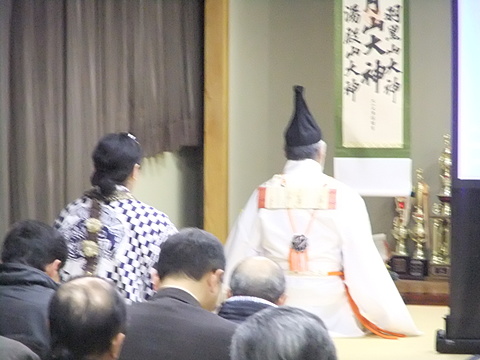 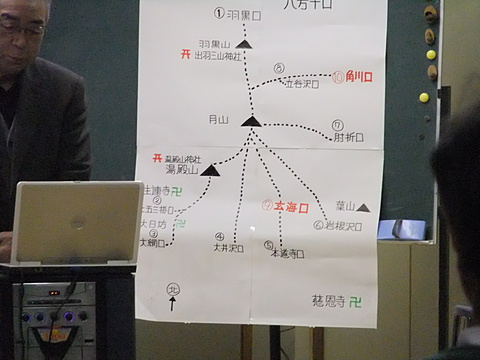 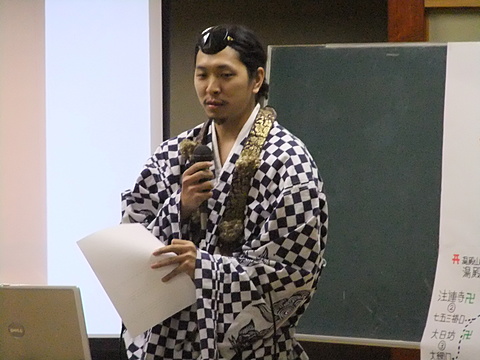 The lecture by the Haguro Buddhist monk was held in farm village environment improvement center of Tsunokawa, Tozawa-mura on Saturday, March 17

On the day the participants nearly 60 including sightseeing relations and local people gathered and swelled including the later social gathering very much.
A starting point of a mountain climb of Tsukiyama that was eight shares of every quarters added "corner Kawaguchi" "Genkai mouth" to this lecture until now and following the fact that it was, it was held, and introduced a great place of Tsunogawa to ten shares of every quarters using a document and the information that Daizaburo Sakamoto of the lecturer checked with a folkloric viewpoint and spiritual explanation titled "the richness of Tsunogawa to see from Japanese culture" by oneself.
Before the lecture Haguro Buddhist monk "a pine Saint"; of the Great East Japan Earthquake by no hoshiyabunko prayed for the development of the memorial service totsunokawano village of the person of memorial service, and passed and was read ga aloud, and did a low head with all the participants.
Taking the opportunity of this lecture, the excavation of the power spot of Tsunogawa advances and thinks that I am connected in what I send the charm as the sightseeing spot to.
First10 11 12 13 14 15 16 17 18Last
Login
ログイン画面へ